Steam ironing over the crumpled shirt - called the Indian democracy...

No Mr. Abdullah you may not have your privacy...

Bad press never fails to irk Omar Abdullah. Last year when the media repeatedly headlined the cycle of violence in J&K, the Chief Minister blamed journalists for obsessing over the negative stories from the state. This year cause of his “dismay and anguish” is much closer home; namely his (confirmed) separation from his wife and (speculative) talk of his plans to marry a high profile news anchor. Abdullah even went to extent of a invoking an “undeclared code of conduct” followed by the Indian media, “that keeps the private lives of public figures by and large private”
So did certain sections of the media cross the hypothetical lakshman rekha when they reported on Omar’s separation and speculated if there was a remarriage on the cards? Even if the answer is in the affirmative, it’s high time that the media breaks down a few self-imposed silos that it has placed itself in. In an age when the private lives of businessmen, sportspersons and actors are open to scrutiny and speculation; politicians are perhaps the only breed of ‘public figures’ who demand (and get) privacy form the preying eyes of the media. 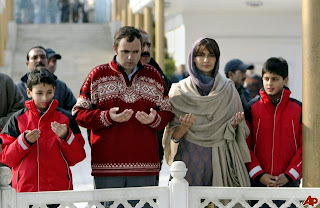 Omar’s separation and alleged linkup is old news on twitter, the mainstream media is just playing catch-up. The reason that got people interested was not his divorce, but talk of his possible marriage again, (that had some very public repercussions) The Chief Minister’s penchant for giving interviews for one television network in particular is a well known fact in media circles. His relationship (which has not been denied) with a news anchor with the said network raised concerns over how Omar would treat other networks in the future. Still more worrying was the article appearing in the The Sunday Guardian that claimed that Farooq Abdullah wants Oamr to marry as Kashmiri Muslim, which would make his image all the more acceptable in the state. Would that make the news ‘personal’ or ‘political’? These issues may be in the grey area, but unquestionably who Omar marries, will have an impact on his politics and his dealings – that makes it public by default.
True that the media has to learn to be dignified while reporting on such matters – but there is nothing as ‘off limits area’ in a politicians life. (Neither have politicians done anything to deserve such special treatment from the media) Abdullah’s (now public) separation may be another sign that the media in India is ready to break the omerta over the private lives of politicians. Strangely the erudite chief minister chose to respond to all the speculation, not on camera, but through a terse statement, leading many to believe that he’s not telling the whole story.
A quick scan of the media in mature democracies would show that there are no inexplicable exemptions given to politicians personal lives. Innumerable fortunes have been undone when the press has come to know about the leader’s indiscretions. Even in liberal America, the public was not OK with the president giving a Big O to Monika in the Oval office. Back home however it’s hard to recall an incident where a politician was punished for his personal indiscretions. Besides scuttling the chances of Jagjivan Ram becoming a Prime Minister (when his son was caught ‘between his mistress and the mattress’) the media has not dared to expose a high profile national leader.
In India we take indiscretions of our politicians for granted, perhaps reflective of our tolerant nature that has allowed the polity to loot the nation though scams and illegitimate business ventures. Today we are beginning to ask how out ministers are crorepatis (many times over), similary we should question their probity in their personal lives as well.
Recent examples set by Amir Singh and ND Tiwari have only shamed politicians (and the governor’s house) further. Perhaps it is time that journalists cover more than the usual 3pm press conferences and take the neta to task for his omissions and commissions outside office as well. This would only enforce more stringent codes of conduct on our politicians who are anyways supposed to lead a more ‘public’ life. For too long they have lived secret lives, not anymore, financially or otherwise.
So, no Mr. Abdullah, you may not have your privacy.
PS - Image Courtesy AP
Posted by Akash Banerjee at 10:35 PM No comments: